I've been googling myself again. I know, I know. Egotistical freak. Actually, I was wanting to see whether my email address was floating around at all (which might explain a recent influx of annoying spam).
What I found when typing in part of my email address was bizarrely disturbing:
http://nylonsmovies.com/download-The-Da-Vinci-Code-1168.html
On this page is a review by "E. Taylor "elizabeth_jane_taylor" (24 September 2011)". And it is indeed a review I wrote. But I didn't write it on 24 September 2011 and I didn't write it on that website. It was written on amazon.co.uk years ago, just after The Da Vinci Code was first released on DVD.
Not that I really mind my words being spread around, but it was strange to see it re-published without my permission. Really random, too. Having glanced at the other reviews on the page, I can only think that the website owners were looking for reviews that compared to the book to the film. Maybe it's a new site and they wanted to make themselves look popular by stealing reviews from elsewhere and claiming users wrote them on their pages.
It's still rather disconcerting. And shows how things don't simply disappear from the web once you publish them. They can, apparently, randomly reappear after years of being forgotten.
Be careful what you write: you never know who might be reading or where it's been published.
Posted by E J Taylor at 14:13 No comments:

Lovely way of describing intertextuality, one of the joys of reading.

That episode also moved on to speculate over the future of the written word. One particularly interesting thing about the ebook, which I hadn't thought about before, was mentioned: the possibility of a multimodal text. As technologies advance, an ebook novel could be a hybrid of all sorts of different things like written text, images, videos, sounds and more. What a curious thought! What would that mean for the genre of the novel? It could take it into all kinds of strange dimensions... Well worth watching that episode for food for thought.

It's half term at the moment. And also my birthday tomorrow, which I keep forgetting about. Happy birthday to me... I have lots of planning to do for my teaching. When I go back after half term, I'll need to be ready to teach A Christmas Carol, The Canterbury Tales (a play version), Media and GCSE English Language. It's going to be a busy week!

Here's a lovely quote:
"I can never forget the moment I first saw a novel I’d written that had arrived from the printers. I put it on the table and I looked at it and I lowered my eyes to its level, I sniffed it, I opened it, I walked and circled it, I simply couldn’t believe that something I had written could end up as that magical thing - bound, printed text, a book."
It's by Stephen Fry and comes from Episode 4 of Planet Word, a BBC series currently airing about language. Ahhh... how I dream of that day! It would be, as he puts it, magical. Today I received some books - real, printed books - from one of my writing buddies and that was amazing in itself. To think that one day, perhaps, it could be my words in there... It's all part of the dream.
I'd recommend the television program to anyone who is even the slightest bit interested in language. So far the series has been about language acquisition (fascinating topic), the many languages and accents across the world (very funny episode), the uses and abuses of language (lots of swearing), and the one I'm watching at the moment is about writing itself.
Wonderful. :)
Posted by E J Taylor at 14:09 No comments:

One Direction to Insanity

Been a while since I blogged, though I'm not sure how much I should blog about day-in-day-out of life at the moment because of 'safe-guarding'. I'm not sure I'd want the wonderful children at my school to find this...
But I'm suitably outraged to write an interesting blog post, so feast your eyes on this: 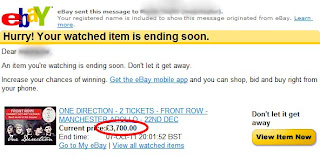 I heard about this particular ebay item last night on CrimeWatch. Last night, those two tickets were selling on ebay for about £2000. Which was outrageous in itself! But I was curious to know just how much it would sell for and watched the item with my ebay account. The price you see is the one it sold for, as far as I can make out. (It's disappeared from the listings now).
Almost doubled in one day.
Three thousand seven hundred pounds!
Where to begin? I seriously am flabbergasted. I can't see how you could justify a figure like £100 for a single night's entertainment (though people in Cambridge regularly do it with their crazy May Balls), but this is of a totally different scale!
Think of all the things you could do with that kind of money! You could go to somewhere like Australia for a substantial holiday, or around all the roller-coasters in Florida. Or it would get you a cheap second hand car. Or you could buy a million books... The possibilities are endless. But there's one similarity to everything in MY list: if I'm going to pay thousands for it, at least it'll last for quite a long time!
And to see a silly boy band, of all things! I paid £65 for David Tennant and Catherine Tate in Much Ado About Nothing fairly recently, because the cheap tickets had already sold out. I wasn't entirely happy about it, but it seemed worth it overall. Brilliant experience. Yet, if the tickets had been any more than that, I'd simply have passed. Even something like an opera in London is only a couple of hundred pounds, and that's for one of the highest forms of art...
Ridiculous.
I mean, I'm half inclined to suppose it's fake and that it's someone's idea of a publicity stunt. If so, then hats off to whoever thought it up: you've successfully conned me into doing some advertising for you.
But if it IS real...
Even cliches like "some people have more money than sense" don't cut it. It's so extreme.
...
All I can say is... if you have £4000 to throw away, can you please throw it in my direction? Thank you.
Posted by E J Taylor at 14:44 No comments: