It's been a stressful sort of holiday, for one reason or another...
It started off pretty well, with a trip to Buckingham and beyond (!) to see a friend who has moved down there to work *sob*. My boyfriend and I turned it into a mini-road trip and we visited Thorpe Park, Warwick Castle (really recommend!), Legoland. In that order. No, you're right, the order doesn't make sense for travelling. But we had our reasons... Then, when I returned up North, I made the most delightful chocolatey goodies with another friend.
Unfortunately, I came down with tonsillitis in the second week of the holiday! It's been pretty rough. I could handle the sore, pus-infected, swollen tonsils but the constant headache and fever were awful. It was hard to do very much for several days, which was frustrating, since there was (as always) a lot to get done. Fortunately, I still had some of the mindless tasks left, so I was doing filing for most of my illness.

I'm still not fully recovered, but I'm feeling a lot better. I can almost swallow properly now!
Another stress has been the threat of moving internet providers. It still hasn't quite happened but THE BOX is in the living room (it has the new wireless router in it). Dad is saving money. He doesn't realise that our current company has been hosting my website for free for the last five years and that my hit count has been oh so steadily creeping up. That's why I've been so frustrated.
Fortunately, a kind benefactor offered to give me some of his webspace, which is ever so generous. Ordinarily, it seems that you have to pay per month! I've had to buy a domain, but now the site is fully transferred over: www.allinfo.org.uk. Please click and help me establish it, the poor thing.
Because I've acted in time, I've put some redirects from my old site to the new site. I'm hoping this will help the new site to establish itself... It's not going to be anywhere near as popular, but maybe just maybe if I'm lucky I won't have to go RIGHT back to one hit a day. Maybe.
Ah well. That's my life at the moment. I'm back to school on Monday, which I am looking forward to. I have various new ideas to try out with my classes. I'm doing Creative Writing with Y7, which should be a nice scheme of work. Which reminds me of my own writing. For some reason Shadow Lords is in my mind at the moment: it wants me to redraft it again. Or to write the prequel. o_O Not sure I have time for either of those things...unless I resurrect my Paragraph-a-Day on Critique Circle.
Posted by E J Taylor at 03:05 No comments:

I should probably make a start on some lesson planning, but I feel I've deserved a break, since I've just come back from another job rejection. Getting a job is so hard...
I thought my mini-lesson today went quite well, and thought I'd at least get through to the interview stage. But it was another lunchtime elimination. If I can take anything good from it, at least they said that no one 'failed' in their teaching...just that some people were better than others. Thinking back, I can think of areas where there needs to be improvement. At the time, the rejection did surprise me -- I was just so happy until that point, because I delivered well today in a number of areas that have previously been lacking.
I do feel that I'm making progress now, more than ever before. My mentor at my new placement school is simply fantastic; I just can't get over how wonderful she is. So I need to keep the progression going and I suppose I'll have to just keep applying. I'm lucky that I can, at least, get invited to job interviews: some people can't even get that far.
So I thought I'd just update the blog a bit about where things are. I'm so determined to be a really amazing teacher... A bit gutted because I would have just loved to have worked at that school so much, but oh well. I suppose I'll find somewhere else...eventually.
Until the next blue moon...
Posted by E J Taylor at 06:15 No comments:

Welcome to the New Year, almost at the end of the first month. Hmm.
Anyway, here's a good quote from an anime film called Whispers of the Heart:

"It’s a special kind of rock called a geode. When you first become an artist, you’re like that rock. You’re in a raw, unnatural state, with hidden gems inside. You need to dig down deep and find the emeralds tucked away inside you. And that’s just the beginning. Once you’ve found your gems, you have to polish them. It takes a lot of hard work." 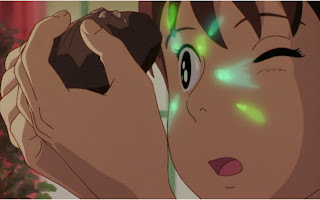 I may share that in class at some point. Hehe.